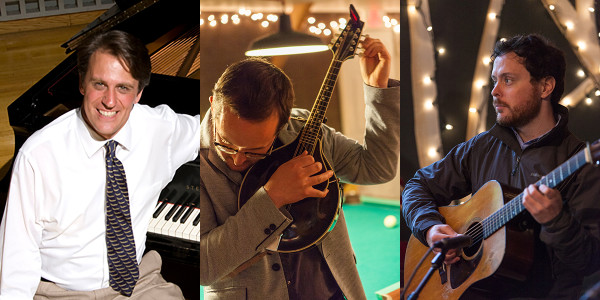 Acclaimed master of American roots music, mandolinist and songwriter Joe K. Walsh is coming to the Meetinghouse, and he is bringing his accomplished friends Maine pianist Tom Snow and guitarist Grant Gordy for a night of part bluegrass, part jazz, part funk, and everything in between. Joe has toured with countless artists, collaborated with other master musicians like Darol Anger and the Gibson Brothers, founded progressive stringband Joy Kills sorrow in the early 2000s, and is currently on faculty at the prestigious Berklee College of Music. His new album, Borderland, is an exercise in subtlety and careful creation. Turning through songs he wrote, or setting the words of Yeats to music, and picking out instrumental tunes of his own creation, Walsh plays and sings with the kind of ease that comes from years of practice and creation. His first inspiration came as a teenager when he heard David Grisman, and then again when first hearing Del McCoury. The music he heard at that young age opened a window to new harmonic possibilities, and started Walsh exploring how to create new American roots music.

Watch Joe, Tom and Grant perform together  – Simple Gifts and Mole in the Ground; and more Joe and Grant playing the Western swing classic Roly Poly.

Doors open at 6 for our signature Maine Oyster and Cheese dishes, concert at 7:30 PM. Tickets are $15 in advance, $20 at the door. Beer, wine, cocktails will be served throughout the night. Join us for a great night of music.