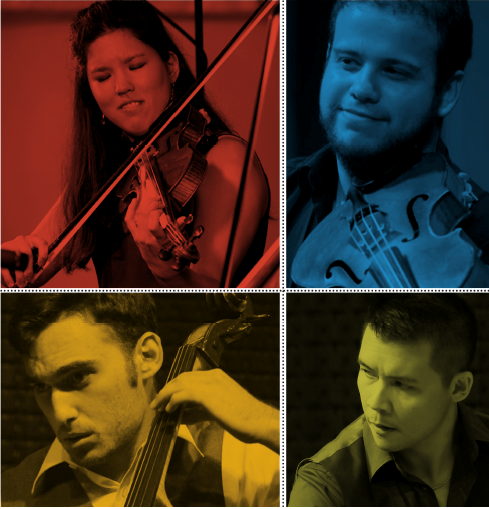 Join us for a very special night as a quartet of outstanding musicians from the Heifetz International Music Institute kick off their 2017 Northeast tour at the Meetinghouse with a multi-genre program of great music. Founded in 1996, Heifetz is renowned around the world for its training of the next generation of great string players. Heifetz on Tour brings a small sample of their musicians to select venues all around the country.

“Communicate – Engage – Inspire” is the motto of the Heifetz Institute, and you will witness living proof of that mission when three brilliant Heifetz alums – violinist Rachell Wong, violist Andrew Gonzalez, and cellist Ben Fried – join Heifetz faculty pianist Carlos Avila in a program that will feature some stunning Baroque virtuoso pieces, and popular favorites by Schumann, Rachmaninoff and Manuel De Falla. You’ll also hear this foursome display their fearsome technique in Celtic, Klezmer, and American popular song, as they offer up a “tasting menu” sampling of the multi-genre “Heifetz Hootennannies,” one of the Institute’s signature series of the summertime.

This marks the first concert of classical musicians at the Meetinghouse, a space built for the era of string instruments. Doors open at six, concert starts at 7 PM, food, bar and drinks available and following the performance there will be a reception to meet the artists.

Tickets are $20. We have discounted tickets for students and CHILDREN UNDER 8 ARE FREE. Seating is limited so please let us know you are coming!

Violinist Rachell Wong attended the Heifetz Institute in 2015 and 2016 as a member of the prestigious Ashkenasi / Kirshbaum Chamber Music Seminar and has been a frequent Heifetz On Tour performer. She has just completed her Master’s studies at the Jacobs School of Music of Indiana University in the studio of violinist (and Heifetz faculty member) Mark Kaplan. Recent concerts include recitals with world-renowned pianist Anton Nel in Austin, Texas and pianist Johan Botes in Lucera, Italy. Rachell was the Gold Medal winner at the 2013 International Crescendo Music Awards and the Grand Prize winner in the 52nd Sorantin International Young Artists Competition for Piano and Strings. She was Second Prize winner at the 2014 Heida Hermanns International Music Competition. For the past two years, Rachell was a frequent performer both in the “Stars of Tomorrow” concerts at the Heifetz International Music Institute, as well as a mainstay of the brand-new “Heifetz Hootenannies” in and around downtown Staunton, VA. Rachel has developed a growing reputation for her “crossover” abilities in Celtic and traditional music, via her violin-cello collaborations first with fellow Heifetz student Nicholas Mariscal (broadcast nationally on Performance Today), and now with new performing partner Ben Fried. Other music festivals have included Sarasota Music Festival, the London master classes at the Royal Northern College in Manchester, the Starling – Delay Violin Symposium at the Juilliard School and the New Mexico Chamber Music Festival.

As an avid chamber musician and soloist, violist Andrew Gonzalez (Heifetz 2012 and ‘13; Heifetz On Tour participant 2014-2015, Artist-in-Residence 2015 and 2016), is now a member ofEnsemble Connect, a two-year fellowship program administered by Carnegie Hall for the finest young professional classical musicians in the United States that prepares them for careers combining musical excellence with teaching, community engagement, advocacy, entrepreneurship, and leadership. Andrew has collaborated with such world-class musicians as Itzhak Perlman, and Heifetz Institute faculty members Daniel Phillips, Shmuel Ashkenasi, Nobuko Imai, and Amit Peled. In addition to his Heifetz On Tour activities, Andrew appeared with violinist Gil Shaham on an extensive European tour, and performed at the prestigious Music@Menlo festival in California and the Verbier Festival in Switzerland. A former winner of the Sphinx competition for minority musicians, Andrew received his degree from Juilliard School, studying under Heifetz faculty member Heidi Castleman.

A Heifetz student in both 2014 and 2016, cellist Ben Fried is pursuing his Master’s Degree in cello performance at Mannes College of Music under Heifetz faculty artist Timothy Eddy. He has performed several times on Chicago’s classical radio station WFMT, and twice on National Public Radio. As a chamber musician, he was a gold medalist in the Fischoff Chamber Music Competition’s Junior Division, and a silver medalist in the St. Paul String Quartet Competition. While at the Eastman School, he was a recipient of the prestigious Performer’s Certificate and the winner of the 2014 Eastman Cello Concerto Competition, subsequently performing Prokofiev’s Sinfonia Concertante with the Eastman Philharmonia. He was also a granted a Take Five Scholarship from the University of Rochester, a tuition-free fifth year to study an integrated curriculum of Economics, Philosophy, and Acting. His previous teachers include Heifetz faculty members Steven Doane & Rosemary Elliott, and Hans Jensen.

Hailed for his “beautiful command of tone and mood…and unruffleable savoir-faire” (San Francisco Chronicle), his “layers of emotional expression” (The Examiner) and his “level of artistry that seem far beyond his years” (Contra Costa Times), Carlos Avila is one of the most in-demand pianists on the classical music scene. His concerts have taken him across North and South America, Europe, and Asia. A frequent Heifetz On Tour artist, his performances have frequently been broadcast on Performance Today and WQXR. Carlos has been a guest at festivals such as Schleswig-Holstein, Tanglewood, Sarasota, Aspen, Banff, Music Academy of the West, Pianofest, Holland, and the Carnegie Hall Workshops where he had the opportunity to work and study with the late Isaac Stern, Daniel Barenboim, and Michael Tilson Thomas. He performed in the Chicago Symphony’s All-Access Chamber series and the New York Philharmonic’s Leonard Bernstein salon series. Carlos was also recently showcased on New York’s WQXR, where he gave an all-transcription recital broadcast as one of the winners of Juilliard’s prestigious Gina Bachauer competition. Carlos has also served as affiliate-faculty at the Atlantic Music Festival and will join the Piano Faculty of the Innsbrook Institute in 2015. A proud Filipino-American, Carlos is a graduate of the Juilliard School and did prior studies at Yale