Skip to content
History of the Robinhood Free Meetinghouse

Here’s a brief history of the Robinhood Free Meetinghouse. The Meetinghouse is a regionally rare example of a two story meetinghouse and the structure is eligible for the National Register of Historic Places. 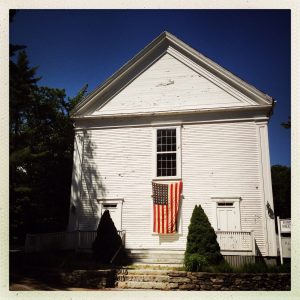 Robinhood Cove is one of several clustered population areas that compromise Georgetown. Situated on the Sheepscot River, this geographical area is critical to the development of Georgetown.

Robinhood Cove was named after Robert (Robin) Hood, which was the English name given to Chief Mowhatawoemit, the leader of the Abenaki Confederacy.[1] The Cove was a significant economic force in 19th century commerce for trade and shipbuilding for Georgetown/Arrowsic.[2]

Benjamin Riggs settled Riggsville on the eve of the Revolution and during the last decades of the century had prospered in his mercantile pursuits,[3] and he built a number of storehouses and a large general store in 1820 to house his merchandise and thriving business.[4] He was also a shipbuilder and an active public servant[5] (Maine Legislature and Massachusetts General Court).[6] His house, the Benjamin Riggs house, was the first structure in the Riggsville/Robinhood collection.

Moses Riggs took over operation of the Riggs family concern on his father’s death and ran it from 1846 to 1884 when it passed to his son Kervin.[7] He was a driving force in the expansion of Riggsville’s economic power.[8]

Moses Riggs was in his first decade of leading the Riggs family business and with other civic leaders sought to build a new, grand meetinghouse to replace the community’s first meetinghouse, which it had outgrown (Moses owned, and sold, that first meetinghouse on its replacement with the new structure). The new Meetinghouse was built in a central location on a hill at the junction of roads leading to prominent homes (Webber Road, Robinhood Road, and Old Country Mile Road.

At the time of its construction, Riggsville was on the ascendant, and the Robinhood Free Meetinghouse was an expensive, public expression of the community’s economic success and the aspirations and devoutness of its residents. The community’s pooling of resources to build this central feature of their communal life was a significant milestone and illustrative of decision making in the community.[9]

The Robinhood Free Meetinghouse is one of eight buildings built by three generations of the powerful Riggs family that form the historic nucleus of the village of Riggsville, based on Robinhood Cove, and represent a century of Robinhood economic and architectural development:[10]

The Meetinghouse has been known by several names, including:

[11] Agnes Powers, History of the Free Meeting House at Robinhood is Given at Services Sunday, The Bath Independent, August 31, 1961.

[14] Agnes Powers, History of the Free Meeting House at Robinhood is Given at Services Sunday, The Bath Independent, August 31, 1961.

[18] Agnes Powers, History of the Free Meeting House at Robinhood is Given at Services Sunday, The Bath Independent, August 31, 1961.

FacebookTwitterLinkedInTumblrPinterest
Page load link
The Meetinghouse is available for your private event. Contact us to learn more.
Go to Top