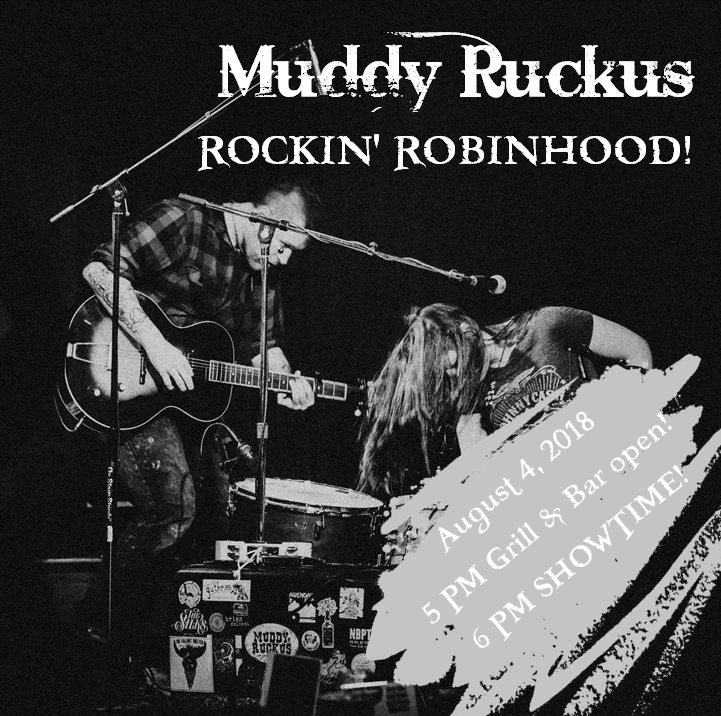 Here at the Meetinghouse we like to switch things up. When super power duo Muddy Ruckus wanted to celebrate their new album Bellows to Mend in Georgetown with a backyard party, we said Sure! Join us for our first outdoor Rockin’ Robinhood fest – we’ll have the music of Muddy Ruckus, a backyard BBQ, and there may be games!

Admission is $12.50 or you can buy the fest package for  $28 – which includes the show plus a dinner with your choice of two BBQ entrees with sides. Add a six of oysters fresh from nearby Robinhood Cove Oyster Farm for only $8! We’ll have Maine beer, drinks, and more food at the event!

Muddy Ruckus is a nationally touring Americana-rock duo from Portland, Maine. Dubbed “Best in State of Maine” by the 2016 New England Music Awards the stripped down power duo features guitarist Ryan Flaherty and percussionist Erika Stahl blending haunting male/female vocals, rootsy guitar and edgy percussion on a suitcase drum kit. The band seasons their music with the salt of the eastern old ports and the mud of the Mississippi River where Flaherty grew up, creating an epic blend of bluesy folk rock, foot stomping rhythms and haunting vocal melodies. The New York Music Daily calls Muddy Ruckus “Darkly Inventive Americana”. They released their new album Bellows to Mend over the winter.