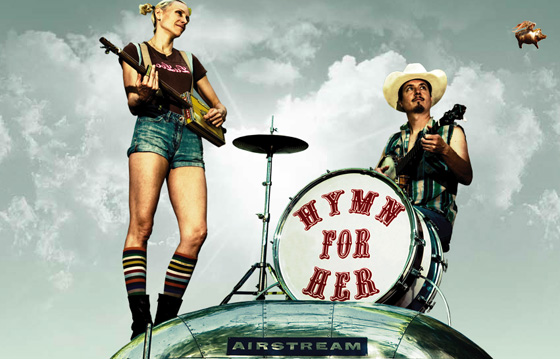 Meetinghouse Presents: Hymn for Her

The duo Hymn for Her comes to the Meetinghouse with their juiced-up backwoods country blues shot through with a dose of desert rock psychedelia. They’ve been described as “Hell’s Angels meets the Amish,” and “Hillbillies with electronics opening Pandora’s Box.” The two create their “ripsaw sounds” (Los Angeles Times’ Randy Lewis) with only a few instruments. Wayne (with the devilish voice), mainly playing the kick-drum, high-hat, acoustic guitar and harp, serves as the group’s rhythmic driving force. Lucy (of the fallen-angel voice) delivers a gritty squall on her “Lowebow” — a custom-made cigar-box guitar: “The Riff Monster.”

Their latest album, “Drive Til U Die” was recorded partially in their vintage 1961 Bambi Airstream trailer and partially in studios with some engineers/producers. (Vance Powell, Mitch Easter & Jim Diamond). For their earlier album “Hymn for Her Presents . . . Lucy and Wayne’s Smokin Flames”, the twosome traveled to Ghetto Recorders/Detroit to work with Jim Diamond.

They are spending this summer touring Europe and the UK and then coming to Maine  – catch them as they storm on through!