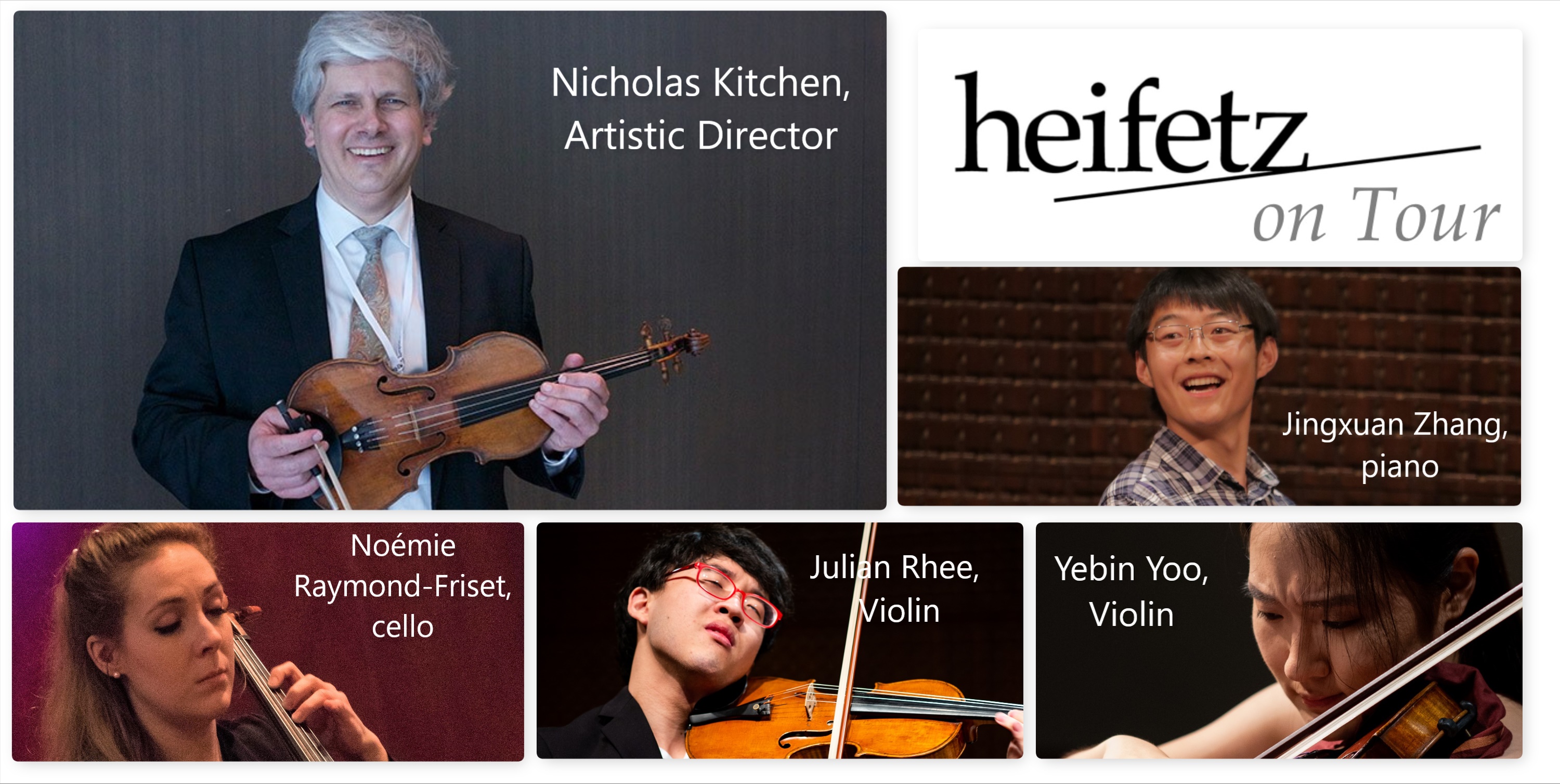 October means the annual return of the outstanding classical musicians of the Heifetz International Music Institute!

With the generous support of the Georgetown Island Education Foundation, performers from the Heifetz Institute, the highly regarded string instruction program and accompanying festival in Staunton, VA, return to Maine for a four-day residency in MidCoast Maine featuring a series of school, civic, and outreach events culminating in a public concert Thursday Oct. 24 at the Meetinghouse.

This year, we are honored to welcome Heifetz’s new Artistic Director, Nicholas Kitchen  to Georgetown! Nicholas, a faculty member of the New England Conservatory, is also the first violinist of the Conservatory’s resident Borromeo String Quartet, an ensemble acclaimed for its “edge-of-the-seat performances” by the Boston Globe and co-founded by Kitchen and his wife, cellist Yeesun Kim in 1989.

Renowned around the world for its training of the next generation of great string players.  “Communicate – Engage – Inspire” is the motto of the Heifetz Institute, and you will witness living proof of that mission in October.

Drinks available before and throughout the show and following the performance there will be an opportunity to meet the artists.

Our dinner option is a three course extravaganza that starts at 6 PM to give enough time to eat leisurely before the show at 7:30 PM.

To start
Romaine salad with pear and blue cheese

Show tickets are $22.50 in advance, $25 at the door. Dinner and show $77.50 – dinner must be reserved in advance! We have discounted tickets for students and CHILDREN UNDER 13 ARE FREE.

Heifetz will conduct school programs in Lewiston supporting their strings programs, Georgetown Central School and Nobleboro Central School. Heifetz will also appear at the Patten Free Library in Bath 5 PM 10/23 for a special class & performance aimed at young adults and a full concert Tuesday 10/22 at St. Andrew’s Church in Newcastle.

In recognition of her artistry, she was named by CBC Music as one of the “30 Hot Canadian Classical Musicians Under 30.” She was also one of the top prizewinners at the Edwin H. and Leigh W. Schadt String International Competition, the Stepping Stone Competition and the WAMSO Young Artist Competition. At the Prix d’Europe 2014 and 2017, she was awarded the Beatrice Kennedy-Bourbeau Award (Best Interpretation of a Work) and Guy-Soucie Award (Best Interpretation of a Canadian Work). Previously, Ms. Raymond-Friset was awarded the First Prize at the “Grand Prize Virtuoso” of England and debuted at the famous Royal Albert Hall of London in December 2016. In addition, Ms. Raymond-Friset has been awarded a professional development grant by the Canada Council for the Arts and was a laureate of the 2015 edition of the Musical Instrument Bank Competition.

Pianist Jingxuan Zhang’s musical journey started in Beijing, wound its way through Indiana and New York, and brought him to Boston. He did his undergraduates studies at Columbia University and The Juilliard School, where he studied with Jerome Lowenthal; and received his Masters Degree from New England Conservatory under the tutelage of Alexander Korsantia. After graduation, he remained in Boston to teach and play. He loves to cook the Chinese food he grew up eating and converse with his friends over the dinner table. Now he can even enjoy the Lebanese and Ukrainian cuisines of his two pianist-housemates and good friends. Otherwise, he likes to swim briefly in the frigid ocean during autumn or spring-time. Finally, he wants to share shareable things – music, food, time, knowledge, and company – with others!

Violinist Julian Rhee came to the Heifetz Institute in the summer 2019 as a member of the Institute’s prestigious Ashkenasi/Kirshbaum Chamber Music Seminar.  He has a fast- gaining recognition as an outstanding musician and performer in the US.

The First Prize winner of the Johansen International Competition in Washington DC, Julian was also awarded the Solo Bach, Commissioned Work, and the Elaine H. Klein Prize at the Irving M. Klein International String Competition. In 2018, Julian was a Finalist of the National YoungArts Foundation, where he performed at the New World Center in Miami. Subsequently, Julian appeared at the John F. Kennedy Center as a Presidential Scholars in the Arts, and received his medal at the White House.