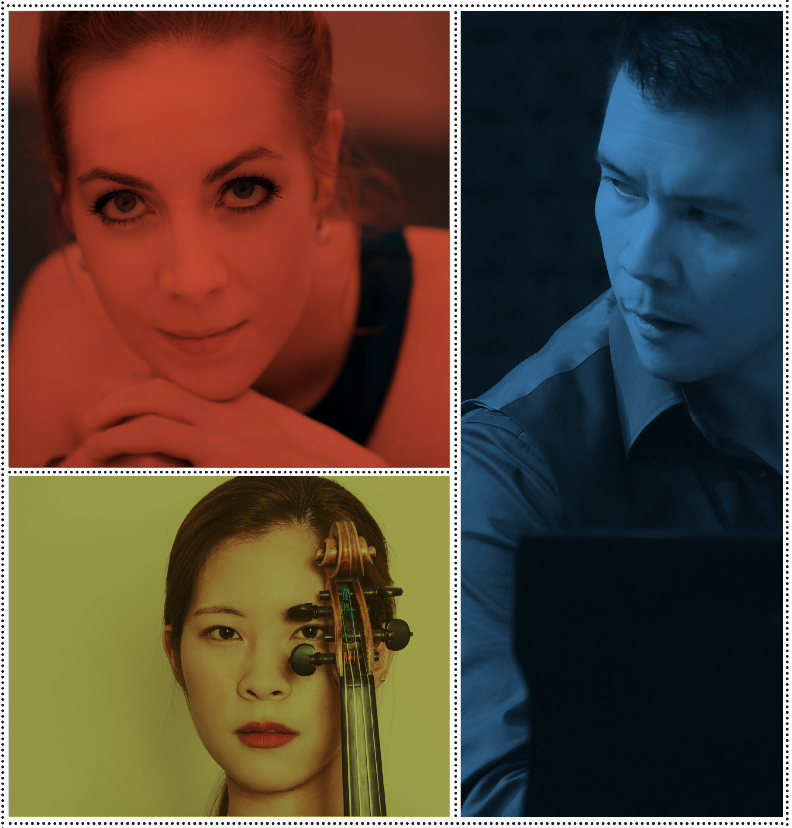 They are back! The outstanding musicians of the Heifetz International Music Institute return to the Meetinghouse for a special multi-genre program of music.

With the generous support of Sharon Drake Real Estate and the Georgetown Island Education Foundation, a trio of performers from the Heifetz Institute, the highly regarded string instruction program and accompanying festival in Staunton, VA, kick off their 2018 Northeast tour at the Meetinghouse. Founded in 1996, by virtuoso soloist and pedagogue Daniel Heifetz, the Institute is known for its Heifetz Performance and Communication Training, a unique approach to music training, education and presentation.

“Communicate – Engage – Inspire” is the motto of the Heifetz Institute, and you will witness living proof of that mission when three brilliant Heifetz performers – violinist June Lee, violist Noémie Raymond-Friset, and Heifetz faculty pianist Carlos Avila  – perform the program “April in Paris,” featuring some of the greatest works of solo and chamber works by noted French composers Claude Debussy, Maurice Ravel, and Camille, Saint-Saëns, along with those who studied, worked, gambled, and otherwise left their mark on the City of Light, including Fritz Kriesler, Niccolò Paganini, and even the Argentinian tango master Astor Piazzolla!

This concert is part of the Meetinghouse’s commitment to bringing a wide range of musical genres to play on our upstairs stage, a space built for the era of string instruments. Doors open at six, concert starts at 7 PM, food, bar and drinks available and following the performance there will be a reception to meet the artists.

Tickets are $20. We have discounted tickets for students and CHILDREN UNDER 12 ARE FREE. Seating is limited so please buy your tickets in advance!

Violinist June Lee (Heifetz 2007, 2008, and 2017) believes that music is the most intimate and transparent way of revealing the resonance of her heart.  Born in Seoul, South Korea, June began studying piano at the age of four with her pianist mother.  However, she soon found a new interest in cello, and started exploring the instrument.  Yet, the mellow and melancholic sound of the big wooden instrument was still insufficient to her.  When June turned eight, she found her voice on violin, and began vigorous study with Sung-Ju Lee at the Korea National University of Arts Pre-College Division.  Led by her continuous enthusiasm and passion for music, June expanded her music education and artistry in Austria, Brazil, Germany, Korea, Russia, Spain, Switzerland and United States with Victor Danchenko, Anke Dill, and Patinka Kopec, through schools and festivals.  June has given concerts as a soloist in various venues including, Carnegie’s Weill Hall and Symphony Space in NYC, and as an orchestral musician in Carnegie Stern Hall, David Geffen (old Avery Fisher) Hall, and Alice Tully Hall under the batons of John Adams, Marin Alsop, Nicholas McGegan and Leonard Slatkin, amongst many other renowned conductors. Treasuring every moment of Art in her life by further developing her artistry, June has completed her undergraduate degree from  the Juilliard School. and is currently pursuing her Doctorate degree in Performance and Literature at the Eastman School of Music.

Cellist Noémie Raymond-Friset (Heifetz 2017 and Heifetz On Tour) has been called one of the most promising Canadian cellists of her generation, Noémie is a passionate musician, praised for her sensitive and refined playing. She began playing the violin at age 4, and switched to the cello at 7. She has a master’s degree from the Université de Montréal, and is currently studying with Heifetz Institute faculty member Steven Doane at the Eastman School of Music, after having previously been in the graduate diploma program  at New England Conservatory. NEC selected her to attend the Amsterdam Cello Biennale Festival, where she entered the Lutoslawski International Competition. Her critically-acclaimed performances include a Yo-Yo Ma master class to an audience of 800, the Saint-Saëns concerto for cello and orchestra, and the first movement of Dvorak’s concerto with the National Arts Centre Orchestra, and Vivaldi’s concerto for four violins and cello with Pinchas Zukerman playing first violin. As a laureate of the 2015 Canada Council for the Arts Musical Instrument Bank, Noémie plays on a Joannes Guillami cello dating from 1769, on loan from the CCA.

Hailed for his “beautiful command of tone and mood…and unruffleable savoir-faire” (San Francisco Chronicle), his “layers of emotional expression” (The Examiner) and his “level of artistry that seem far beyond his years” (Contra Costa Times), Carlos Avila is one of the most in-demand pianists on the classical music scene. His concerts have taken him across North and South America, Europe, and Asia. A frequent Heifetz On Tour artist, his performances have frequently been broadcast on Performance Today and WQXR. Carlos has been a guest at festivals such as Schleswig-Holstein, Tanglewood, Sarasota, Aspen, Banff, Music Academy of the West, Pianofest, Holland, and the Carnegie Hall Workshops where he had the opportunity to work and study with the late Isaac Stern, Daniel Barenboim, and Michael Tilson Thomas. He performed in the Chicago Symphony’s All-Access Chamber series and the New York Philharmonic’s Leonard Bernstein salon series. Carlos was also recently showcased on New York’s WQXR, where he gave an all-transcription recital broadcast as one of the winners of Juilliard’s prestigious Gina Bachauer competition. Carlos has also served as affiliate-faculty at the Atlantic Music Festival and will join the Piano Faculty of the Innsbrook Institute in 2015. A proud Filipino-American, Carlos is a graduate of the Juilliard School and did prior studies at Yale

We are closed until the Governor advises it is safe to reopen. Please stay safe, friends and we'll see you soon. xxoo, Ali & Carlos